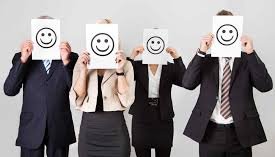 The worst kind of corporate culture is a make-believe one. It’s like going to church and seeing Kumbaya on the music sheet, but when the service starts no one is singing.

Sad to say, for many would-be employees that value a workplace’s environment as much as they do compensation, the job can get pretty ugly once the time clock gets punched. Why does a company offer the promise of a productive and fun place to work, only to crush the enthusiasm and energy of its new recruits?

Often times, it’s a well meaning, however costly error in judgment. The CEO reads the latest book on corporate culture or gets motivated by a workshop speaker, then convenes the leadership team and proclaims that the company now cares about its employees. It doesn’t take long in that scenario for the rank and file to figure out the culture is actually a catastrophe, turnover numbers escalate, and management gives up on caring about anyone but themselves.

Occasionally, you’ll hear about a ruthless CEO whose arrogance believes that a deceptive HR recruiting campaign will discover some mindless sheep that mistake tyranny for teamwork. People aren’t stupid, so the culture eventually collapses there as well.

Tony Hsieh, CEO of Zappos said, “If you get the culture right, most of the other stuff will just take care of itself.” That’s hard for the traditional, bottom-line driven chief executive officer to swallow. Results matter.

But as young people bring their unique gifts and talents to the twenty-first century workplace, it is incumbent upon CEO’s to rethink the way they recruit, select, hire, train and engage new hires. In order to regain a competitive edge in the world market, driving the belief that the collective energy of a team of energized and enthusiastic employees shapes a culture that produces dramatic results is essential to our economic survival.

Corporate culture has nothing to do with the simplistic notion of creating a make-believe, fairy-tale, happy place to work. Rather, it has everything to do with dignifying the skills and abilities of those men and women, young and old, who strive every day to support their families, enrich their communities, and honor their country.

Tom McQueen has over 20 years experience in the automotive industry. He is PDPAuto’s automotive industry expert and has consulted with over 400 dealerships on performance improvement and employee engagement. Tom is also an award-winning author and executive coach.