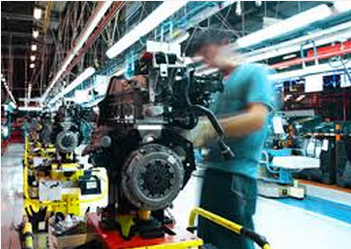 In the December 9th issue of Global Manufacturing, Phil Lewis explains why manufacturers need to embrace a new era of business software. Lewis, Senior Director, solution consulting, EMEA at Infor, looks at why business software is finally getting the makeover it deserves. The last decade has seen somewhat of a technological revolution with consumer user experience (UX) pushing boundaries and exceeding expectations of what is possible.  At the turn of the century, the idea of using a mobile phone app to make coffee, plot the precise locations of flu epidemics using social media reports, or track the journeys of trains, planes, and automobiles, would have been dismissed as sci-fi. We now take such concepts for granted.

Lewis continues that sadly this revolution failed to get past the door of the business UX, where users have instead been forced to adapt to their respective enterprise software solution, tolerating its clunky features and cumbersome layout, largely because there was little by way of an alternative. However a new generation of users, or millennials as they have become known, has challenged the status quo in recent years, disrupting what has been considered the norm for manufacturers. Raised on a diet of slick consumer apps and social media, this new generation of users refuses to settle for unwieldy, confusing applications that only make their jobs harder. Instead they are demanding the same standards they are accustomed to in Instagram, Twitter, or Snapchat when they need to check an order status, track their supply chain or establish a BoM.

Through challenging the ineffectiveness of the way traditional business software is presented, this new generation of users has presented developers with two choices – to rely on the fact that it has been “good enough” for so long and refuse to move with the times; or embrace this shift as an opportunity to help manufacturers enhance their talent acquisition and productivity. There is little doubt that a clear business case exists for business software to be as easy, efficient, and attractive as the apps on smart phones. But while they should feel effortless to use, creating the right look, feel, and intuitiveness is far from effortless.

To get it right, developers must immerse themselves in a manufacturer’s day to day business, gaining an in-depth, first hand understanding of specific business processes, operating environment and challenges they face. The single most important factor in user-centric interface design is acquiring the knowledge necessary to see through the eyes of the user. Only then is it possible to understand the impact of more/less clicks, steps and features, and foster intuitiveness and engagement.

For anyone in need of convincing that this level of effort is worthwhile, a leading manufacturer in the hi-tech industry recently told Lewis that the user interface had become so much more than a ‘nice to have’.  In his words, “the user interface it is now a crucial means of engaging new talent and encouraging user adoption, which in turn expedites the productivity gains and process improvements business software offers.”

Louise Dickmeyer, President of People Driven Performance Solutions suggested, “What is missing from this analysis are the plant floor workers who need the same user interface ease, simplicity to be engaged, involved, and retained. Too often without this shop floor personnel connection, a dollar an hour more per hour down the street has the workforce exiting in droves.” At a time when great expense is made to hire well, train extensively, and capture best employees with targeted skillsets and great attitudes, the user interface is remarkably behind….it is now, has always been, and will always be, a conversation and connection between the employees and the employer. The team concept does require a strong user interface, namely a manufacturing leader who ensures that every valued member of the staff knows they are wanted and the most valuable commodity of the organization.